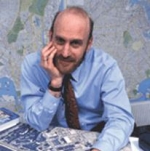 I began my career working for the NYC Department of City Planning in 1969 as a planner in the Williamsburg-Greenpoint communities of Brooklyn. From day one I had to constantly utilize maps and location information in those pre-computer, pre-GIS days. Ten years later I was in the Mayor’s Office as the technology coordinator in the Productivity Program conducting a citywide demonstration of new fangled devices called “microcomputers.” In another ten years I was IT Director of the NYC Department of Environmental Protection and ten years after that Citywide Director of GIS having managed the building of NYC’s basemap and the operations of the Emergency Mapping and Data Center (EMDC) following 9/11. In 2004 I retired from City government after thirty-five years of service. I now work full time for a Federal Infrastructure Protection Program (HIFLD to the Regions) through my employment with Booz Allen Hamilton. I’m sixty-four in Beatle years, and live with my family on the Upper West Side of Manhattan where I can see (a sliver of) the Hudson River from my window. My son attends Vassar College and my daughter is a terrific windmill pitcher in the West Side softball league.

I am a NYS chauvinist. I believe New York is the greatest and most beautiful state in the U.S. I’ve camped and hiked in the Catskills and Adirondacks, swum in the Atlantic off Fire Island, earned merit badges at Ten Mile River Scout Camp, body surfed through standing waves in the Delaware River after my canoe overturned, skied at Hunter, gazed through the mist at Niagara Falls, and sipped wine along the shore of Lake Skaneateles. Naturally, I also think that New York City is the greatest city on earth.

I believe that GIS fulfills the promise of the IT revolution by providing a platform to integrate data across an enterprise, and across states, nations, the world…..and beyond! If we now live in an information age, GIS is the ultimate tool for realizing its power through its ability to combine, analyze, model and visualize data in ways never before dreamed possible. Because GIS can standardize and align ubiquitous location information, from mainframes to smart phones, geospatial systems provide essential support for almost every government and private sector function and are used to save lives, improve operational effectiveness and save money. In short, I believe that “GIS is the DNA of IT.” GIS is the most social of the information technologies and to be successful requires collaboration and sharing among colleagues . In my opinion, there is no such thing as a successful standalone GIS operation. This is why organizations like the NYS GIS Association are so important.

Because of many years of hard work and the smart decisions of its leadership our Association is positioned to have a strong year and an ever stronger future. The new tripartite presidential structure triples top leadership and multiples what we will be able to accomplish. We have a dedicated Board of Directors, and a great line-up of Committee Chairs and members who volunteer thousands of hours annually. Over the coming year our focus will be on increasing value for members by providing more technical training and educational webinars, greater networking opportunities through our website and social media; and robust conferences and summits that build on past success. Our last Geospatial Summit in Skaneateles, which celebrated the 50th Anniversary of GIS with GIS founder Roger Tomlinson, was unforgettable.

As a state-wide organization we recognize the importance of regional associations and other GIS related professional bodies. The Association will be dedicated to working with and strengthening these groups but also believes that as a state-wide association we are in position to offer additional layers and levels of value. Working together we can be a powerful force for individual advancement and the positive evolution of our profession. We also believe that the Association should be a home not only for professional GIS practitioners and academics, but also for those who while not formally trained as geographers and geospatial software engineers, never-the-less depend upon GIS systems daily in areas such as emergency dispatch and response, transportation management, environmental protection, revenue collection and dozens of other vital functions.

How You Can Help

An Association such as ours is only as strong as the willingness of its members to get involved. We already have a dedicated team working on your behalf. What we ask is that you spread the word, encourage others to join and contribute whatever you can. If you are interested in playing an active role there are any number of opportunities for you to join in. There is always more work to be done to strengthen our organization and advance our profession and I look forward to working with you to achieve these goals!

Please take a couple of minutes to find a committee that interests you, contact the committee chair and ask about joining. Also, if you have ideas or suggestions for the Association, please feel free to e-mail me at: leidnera@nyc.rr.com.