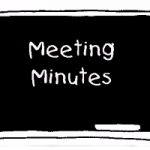 Draft meeting minutes are available for review until Nov 26, 2022. Please use the contact page for any comments or corrections.

This award recognizes outstanding contributions to the profession 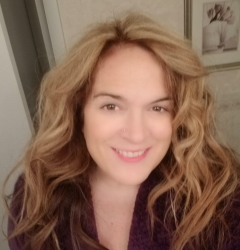 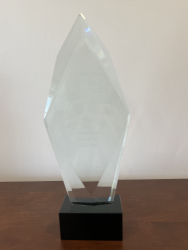 In 2005, Christa Hay joined with the other Incorporating Directors in creating the NYS GIS Association. In 2007 with NYS Not for Profit status achieved, Christa became the Association’s Treasurer and for the next fifteen years she provided an essential continuity that has enabled the nascent Association to survive and thrive.

In addition to her service to the Board, Christa has been a volunteer at so many Association events that all of us who have attended over the years has benefitted from her organizational skills and reliability.  She helped put the “back office” of the Association together and kept it ticking over.

She holds a BS in Geography from SUNY Cortland and a Masters in GIS & Cartography, Urban Planning from SUNY Albany.  During her nineteen years with CT Male she brought best practice GIS solutions to their clients.

Christa Hay exemplifies a quiet dedication to others and a community’s shared commitments that is the foundation of professionalism.

Recognition of impressive and innovative accomplishments across the state.

COVID-19 resulted in significant changes to daily life. In addition to the health consequences, the impacts on travel behavior were also drastically altered. This extreme change was especially noticed across New York State as “stay at home” orders by Governor Andrew Cuomo were first initiated on March 20th, 2020. (cont’d) 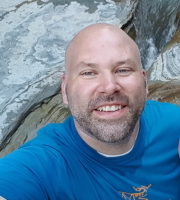 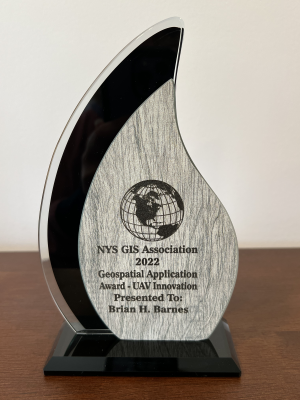 (cont’d) During the first 3 months of the COVID-19 pandemic, and for historic-archival visual comparison purposes, Brian used an Unmanned Aerial Vehicle (UAV) – Drone (DJI Phantom 4 Pro Obsidian model) to record daily & weekly traffic volume patterns on 5 major thoroughfares in and bordering the Town of Amherst, NY. Brian wanted this unprecedented event to be visually collected in a way that future generations could see the drastic change in daily traffic patterns that took place. He collected major North & South bound streets (Transit Road & Niagara Falls Blvd), along with major East & West bound streets (Maple Rd & Sheridan Dr), as well as additional areas (Millersport Hwy), NYS interstate expressways (NYS I-290 & I-990), and Wegmans and Tops Supermarket parking lots. He had already collected these same areas from other regional flights pre-COVID-19. To keep consistent collections were always near to the weekday rush hour traffic periods of 4:30-5:00 pm or late AM on the weekends. A dramatic shift in vehicle traffic was observed throughout all phases of the pandemic. Early declines in traffic and therefore vehicle emissions were reported across the state. Street traffic and parking lot volumes continue to evolve years later as private sector businesses try to return their workforce to pre-pandemic onsite staffing levels.

This project employs GIS as the backbone for harvesting and enabling usable and meaningful disaster-related, spatio-temporal data at a highly granular level. This application introduces a novel strategy related to the enablement of that data with respect to understanding individual and group behavior near COVID-19 laden healthcare facilities. Having access to granular level information enables better decision-making and provides the data needed to make informed decisions. Integration and spatial data management are carried out within the framework of a geographic information system (GIS). From a modeling point of view, GIS is used mainly for the preprocessing and postprocessing of data to be displayed in digital map layers and visualized in 3D scenes. With GIS, the decision-making process becomes smarter as the data can be viewed directly in geospatial settings for initial processing and the basic spatial analysis enables the users to dig deeper into details to make accurate decisions. (cont’d) 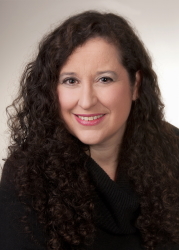 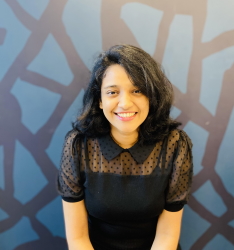 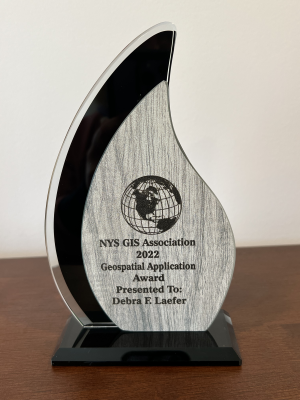 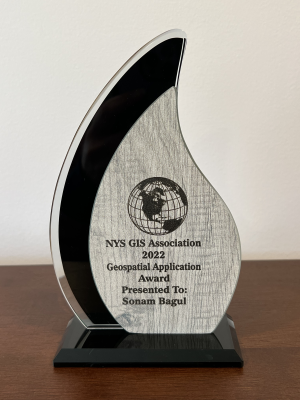 (cont’d) The data used for this project is collected using GIS based applications to mark the exact pathways followed by the individuals while interacting with healthcare facilities. This project demonstrates 3D enablement of disaster-related field data through use of first-hand observations of 1,936 individuals egressing New York City healthcare facilities during the onset of COVID-19 in the Spring of 2020.

We designed a web-based interactive dashboard to monitor the data in 3D space, to understand the people’s mobility patterns near the health care facilities in peak times of Covid-19. 3D epidemiology provides new mechanisms to understand the egress behaviors of individuals and their interaction with surroundings. All the individuals are shown using the cylinder graphics and their origin, interim destination, final destination points are captured to emphasize on the hotspot areas where the chances of infection spread are accelerated. Due to proximity to other individuals, touch behaviors (e.g. touching the same door knob, holding the railing at the same place) at the hotspots can be highlighted and more frequently sanitized or monitored according to the situation requirements by related departments and subject experts.

The web-based dashboard enabled the users to expand the egress behavior monitoring capabilities from 2D to 3D. For achieving this transition to visualize the data in 3D space, the observed individuals were annotated as cylindrical polygons instead of 2D point maps. The definition of feature specific color schema (e.g. time type, gender, medical Personnel, PPE usage) and custom shading for attribute values within every feature added a greater depth to help distinguish between contrasting patterns and behaviors. This was achieved using dynamic vertex color shading and addition of drop-down filters to select features of choice in the dashboard. The color scale legend in the Potree dashboard is set to update automatically when a particular feature from the dropdown menu is selected.

Recognition is given for exemplary support of the GIS profession and of the value of GIS technology in society. 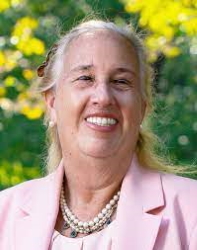 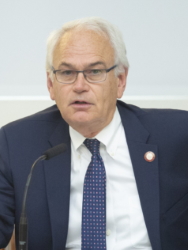 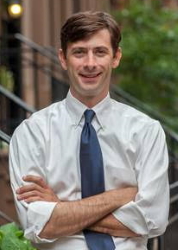 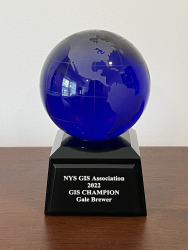 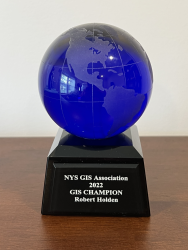 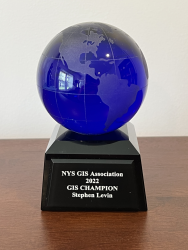 In early 2019 Alan Leidner, then NYC GISMO President, and Wendy Dorf, Member, NYC GISMO Board of Directors with the assistance of Robert Dorf, NYC GISMO member developed the language for City Council legislation to amend the City Charter. The proposed legislation provided for a NYC Geospatial Information Officer (GIO), the development of a Citywide GIS Strategic Plan, and the organization of a Citywide GIS Steering Committee composed of City agency GIS Directors and other key GIS and IT managers.

This legislation is absolutely crucial to the development of GIS in NYC. Because GIS is a “collaborative and sharing technology” it requires a leader and coordinator, a common plan of action, and a team of experts from City agencies. This legislation requires that all three of these steps be taken. We are infinitely grateful to Stephen, Gale, and Robert for making this happen.

Individual Contribution to the Profession Award

This award recognizes outstanding contributions to the profession over the past year. 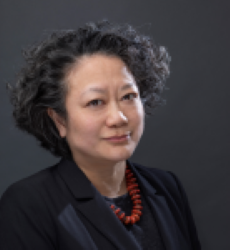 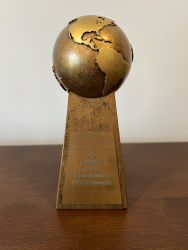 Jiin Wen has been a GISMO member for more than twenty years. As the GIS Director for the NYC Economic Development Corporation (EDC) she has developed important data resources and applications to support the mission and operations of EDC. Additionally, she has been an active member and leader of GISMO serving for many years on the GISMO Board of Directors. Jiin also served as an elected member of the NYS GIS Association Board of Directors. In November, 2021 Jiin was elected GISMO President.

Since then, she has organized and participated in GISMO webinars, the GISMO Application Fair, and the GISMO Job Fair. She has adopted new approaches to interacting with members and working with the Board of Directors. She has also collaborated with Amy Jeu (GISMO) and Theo Goetemann (Basil Labs) on a Citizen Science, disaster management initiative of the Open Geospatial Consortium (OGC). The application uses smartphone technologies to capture respondents’ geolocation and voice responses to a questionnaire, translates the responses into a common language and text format, and uses AI tools to map and analyze this information. The application is designed to improve communications with rescue teams during times when normal communication channels are overwhelmed. It has the potential to save lives both locally and in countries around the world impacted by disaster events.