The NYS GIS Association membership recognized the following people for their contributions to the GIS profession. 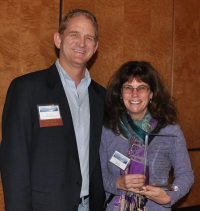 As a Geosciences professor at SUNY Fredonia for nearly 20 years, Ann Deakin’s passion for GIS has given countless students an unparalleled experience, and her commitment to them is truly special.  Her willingness to go above and beyond the traditional classroom environment and give her students real-life experiences, has produced a generation of GIS professionals both here in NY and across the country.  The SUNY Fredonia GIS Alumni page is overflowing with testimony of Ann’s impact. Her students leave college and not only become well-rounded geospatial professionals, but they become innovators.

It is with great pleasure that we recognize Ann Deakin for all of her contributions to the NYS GIS community. 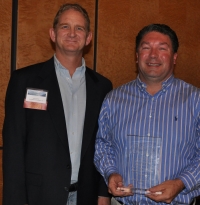 Larry Spraker continues to be one of a handful of recognized leaders in the NYS GIS community. Larry began his professional career in 1988 and from the beginning he was actively involved in building our GIS community. He was a founding organizer of the Capital District ArcInfo User Group (CAPArc) and has worked on many of the State’s major GIS initiatives. As an innovator, he recognized the potential of web-based GIS applications, and is regarded as one of New York’s leading experts. Mr. Spraker has served as a member of the Private Sector Advisory Group and the Data Coordination Work Group for the New York State GIS Coordination Program. He also taught introductory and advance GIS courses as an adjunct faculty member at the State University of New York at Albany and Rensselaer Polytechnic Institute. Mr. Spraker is currently President of Fountains Spatial, Inc. (FSI).

It is with great pleasure that we recognize Larry Spraker for all of his contributions to the NYS GIS community over the past 25 years. 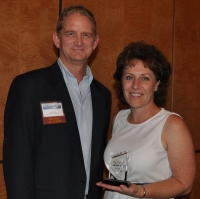 For the last couple of years, Cheryl Benjamin has been educating GIS and emergency response personnel across the State, via information and resources at the NYS SAM (Street Address Mapping) project site, monthly webinars, dissemination of information on current and upcoming Next Generation 911 standards, providing training opportunities, raising awareness with the various CAD vendors working in 911 centers in our State, and most recently, providing a common operational National Emergency Number Association compliant GIS database and maintenance system that can be used across the State.

It is with great pleasure that we recognize Cheryl Benjamin for all the hard work she has done to get NYS ready for Next Generation 911 and the future of saving even more lives. 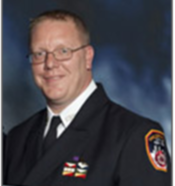 Steven Pollackov was the Commander of the FDNY GIS UNIT and spent 25 years in service to the Fire Department advocating for the value of geospatial technology. He has had a long time involvement with the NYC GIS User Group, the NYC Arc Users Group, and the NYS GIS Association. During his tenure he was also the Tri State coordinator for the National Public Safety GIS Foundation and a frequent speaker at GIS Events across the country on the subject of Public Safety GIS.

For someone who spent a career dedicated to public safety and the advancement of GIS, it is great pleasure that we recognize Captain Steven Pollackov as a GIS Champion for 2014.

For many years, Mark has seen the value of GIS in local projects, like the Jones and Laughlin Redevelopment project and various water infrastructure improvement projects. Maps and GIS data allow him to easily communicate project ideas, issues, and progress to his Town Board, other government officials, and the public. In 2013, Mark Hall, as the Town of Fine Supervisor, was the lead agent for the Western Adirondack Regional GIS Project, the scope of which was to convert five rural Adirondack municipalities’ hardcopy water and wastewater engineering drawings into digital, GIS format and make the data accessible through a web-based GIS. Mark encourages his employees and members of the community to use the web-based GIS to help with many local projects, including the Wanakena Footbridge Reconstruction and the Black Fly Program.

Mark Hall continues to support the growth of GIS in his community, and it is great pleasure that we recognize Mark Hall as a GIS Champion for 2014.